Like cars, bicycles are to be ridden on the left side of vehicle roads. Also, you must be considerate of pedestrians.

Ride on the left of vehicle lanes in Japan!

A bicycle is a class of vehicle. Under the law, bicycles must be ridden in the farthest left lane of the roadway.

Bicycles may be ridden on sidewalks where marked ‘Bicycles Permitted on Sidewalk’, but pedestrians have the right-of-way.

If you encounter pedestrians, slow down and pass them with safe clearance. If you cannot pass them safely, stop and walk your bike. Do not ring your bell!

Be courteous to pedestrians and local residents!

A road is not a race course. People live and work in the area, so please be grateful to local residents for allowing Biwaichi to go through their community. Be sure to reduce your speed when riding through villages. When people get out of the way for you, it will make them happy to say, “Thank you.”

Hand Signals (Whether riding alone or in a group)

Since bicycles are not equipped with indicators or brake lights, hand signals communicate your intentions to drivers and others behind you.

Also, say what you are doing at the same time. If you are unable to use hand signals, you may just announce your intentions. Riding in a group is safer when trailing cyclists verbally acknowledge the leader’s hand signals.

What are the blue lines for?

The blue lines you see on the road mark the Biwaichi route.
They are only found in Shiga Prefecture.

*It is strongly recommended to ride counterclockwise around Lake Biwa, in which case the wfblue lines appear only on the lake side of the road.

The blue lines mark the bicycle lane. When riding on roadways, you must obey the same traffic rules as cars.

Solid blue lines are marked outside of vehicle lanes.

The blue lines mark the general area considered the bicycle lane. When riding on pedestrian / bicycle paths, watch out for pedestrians and observe all warning signs, etc.

Pedestrians should watch out for cycists and walk the edge of the path.

Pedestrian / Bicycle paths are separate roadways for pedestrian and bicycle traffic. There are many along cycling routes like Biwaichi. Unlike with ordinary sidewalks, bicycles are not required to travel slowly on pedestrian / bicycle paths except when passing by pedestrians. 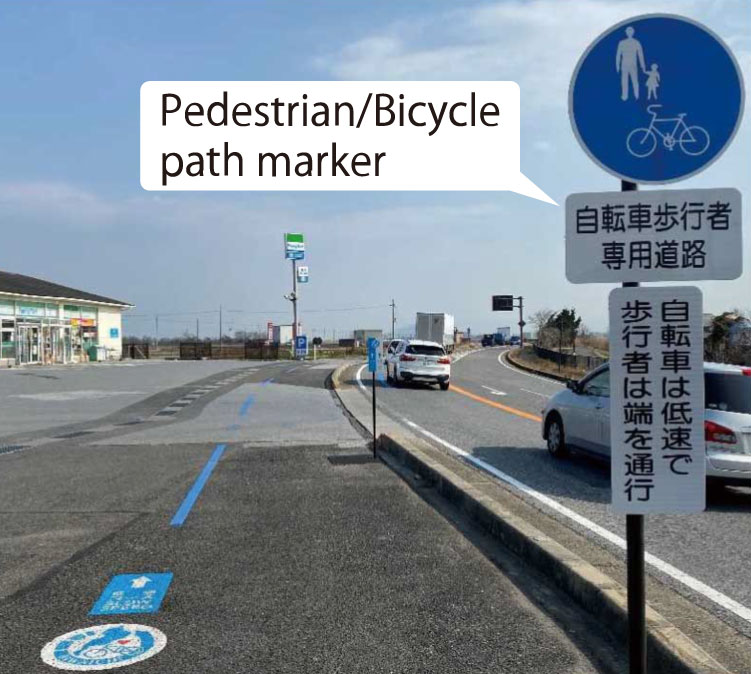 3 Gs of the “Biwaichi Mind”

Being mindful of the following will make your ride more enjoyable for you and the communities on Lake Biwa.